I'm Matt Shelton, and This is How I Work

Lifehacker, one of my favorite place on the internet, started a series a while back called "How I Work", which details how various internet/tech/media personalities work. It gives some interesting insights into the habits and technology behind many people who folks may not know or only know by name. Kinda neat. For the sake of documentation, I thought I'd do the same thing about myself.

Current mobile devices: iPhone 4 for me, iPhone 4s for work, iPad 2nd gen for lots of other stuff

What apps/software/tools can't you live without?

Dropbox. Everything I need is in Dropbox: my family's photo library, all of our documents, my scanned file cabinet, all of my files for work that I need to keep in sync between machines. I have the Pro200 account with their Packrat unlimited file history feature.1 I use LastPass for password management.2

In the non-digital world, I would have a hard time without my Gerber Compact Sport. I've owned the same one since 1998. It lives on my belt.3 I've considered replacing it with an EVO or the Bear Grylls Ultimate Multi-Tool, but I have no good reason to do so.

At work, I have a Jerker in a standing desk configuration. I've been standing in the office for about 18 months with no plans to stop any time soon. I have a small conference table with chairs for meetings, and a Pöang chair for when I need to relax/think/nap/etc. (No, I don't really nap in the office.) I have an extra display that swaps between a mac mini and a 4-year-old Dell that I use as a file server / terminal service / VM host. Mostly that screen is off. 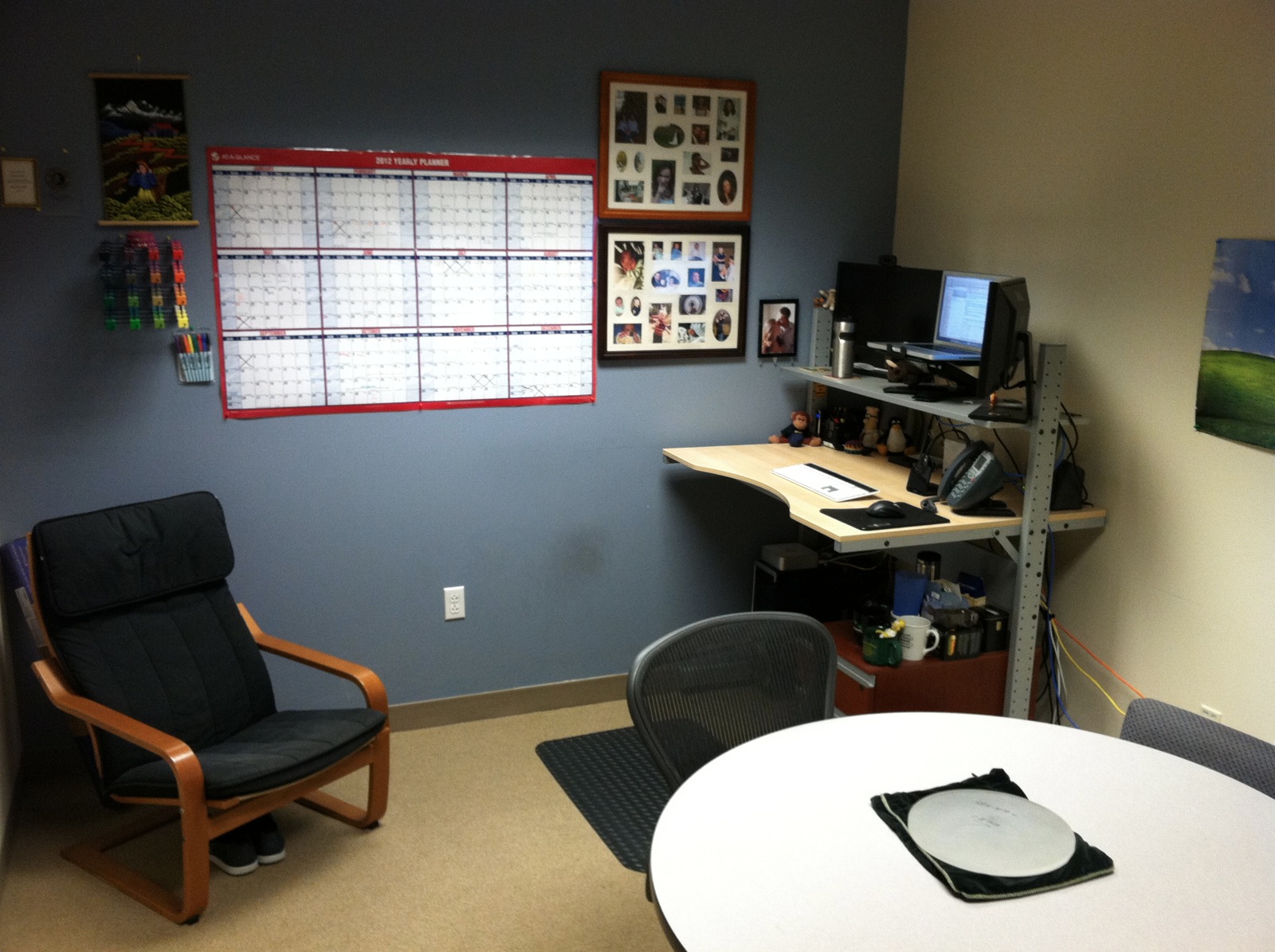 When I work at home, I sit at a very cheap Ikea table. It's not at all ideal, but it works and I've moved my desk around enough times now that trying to come up with anything more permanent wouldn't be a good use of time or money. I had a standing desk in an office for a while, but that's now our guest room and the mobility is more important to me now.

What do you listen to while you work?

It depends on to what I've recently been tipped off. I tend to go from an assortment of CCM tracks to listening to any given album by BT on repeat. In August I listened to Overexposed by Maroon 5 about fifty times. Today I can't stop listening to BT's new track "Must Be The Love", and I'll probably go back to ITSAESAYAI shortly.

Any email that I receive to which I can reply immediately, I do. It keeps the small stuff from getting in the way of the big stuff.

I don't have one. At the moment I'm capturing tasks in Reminders on either one of my phones, and having Outlook nag me. If it's convenient to type them in at a given time, I jot them on paper and transfer later. This is one area that I would love to find some level of improvement in some day... I'm terribly dissatisfied with every single thing I've tried. My work life is in Outlook, but on the Mac, it's a pretty terrible e-mail client. Running it in a VM isn't sustainable performance-wise, and anything I've tried to use for tasks that syncs with Exchange is fairly terrible. I was using Remember the Milk for a long time, but its Outlook sync was really buggy and kept corrupting itself. Maybe having Reminders natively in 10.8 is enough of a reason to upgrade. Maybe?

Besides your phone and computer, what gadget can't you live without?

My Grid-It. It makes my bag so insanely tidy and has every cable/connector/drive that I need in one place. What everyday thing are you better at than everyone else? What's your secret? Cutting through the BS to help someone when they are asking for help but can't/won't say it. My secret is... not really a secret... It's the base of my personality to want to fix everything.

Be strong and courageous. Do not fear or be in dread of them, for it is the LORD your God who goes with you. He will not leave you or forsake you.

I posted my favorite non-biblical advice here a long time ago:

I don’t care how good you are at programming, finding bugs, whatever. If you’re rude, or if you speak poorly to people who don’t understand your... quirks... you will wind up being shunted to the side. No one wants to work with someone who makes them feel beat down all the time, or someone who they simply can’t understand, or someone whose reaction to every issue is to start wailing about the end of the world.

It reminds me to be kind, even why my default reaction might be to tell someone just how stupid I think they are acting.