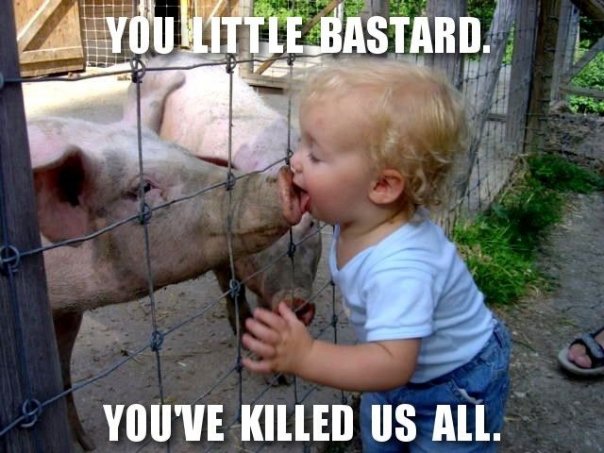 I've been unsure as to the right response to the Swine Flu "epidemic" that has recently caught the world by storm.

Ok, really only twitter. And France. Other than that, it's just been mildly irrational fear and big red letters at drudgereport, so then I guess I've found the right response: skepticism.

"Seasonal flu each year causes tens of thousands of deaths in this country -- on average, about 36,000 deaths," Besser said. "And so this flu virus in the United States, as we're looking at it, is not acting very differently from what we saw during the flu season."

This really brings me back. Remember when there were cases of SARS in Canada, and everyone in the bordering states thought they were going to die because the jet stream was going to blow SARS southward and then there would be pestilence and famine and death and...

Yeah, it didn't happen. Just like with the swine flu on that AirTran flight from Cancun which actually turned out to be a case of Tequila. With SARS, the "pandemic" affected about 8,000 people worldwide in 2003, and of that ~8,000, only 27 were in the U.S. None of them died.

Look, it's the flu. It's a fairly nasty variety of the flu, to be sure, but it's still the flu. Stay hydrated, get lots of rest and wash your hands often. Kids are more susceptible to complications from illnesses like this, so keep your kids hydrated and wash their hands. It's right to be safety-conscious, but it's not right to be irrational. That Hispanic guy you work with is not going to give you the Swine flu so stop being a moron.

Ok, he might, but so might any other co-worker, and still, you're as likely to get the regular flu, so just wash your hands, mkay?