My house is an odd mix of cabling oddness. The previous owners had both digital cable (for Internet service) and two satellite dishes, split ~9 ways (for hdtv). They also, at some point, had Verizon FIOS installed with both a phone and ethernet drop installed to this little nook in the living room. There is an incredible nest of coax cable in the attic, which I plan to (mostly) rip out one of these days.

The two telco drops from that original FIOS install were actually fairly accessible in the attic, so when I had FIOS installed, I asked the tech to patch in that phone line, but leave the ethernet alone since I wanted to run cat6 throughout the entire house. The FIOS tech was really amiable and creative, so he fished the coax run from the fiber patch area in the garage, up the wall, across my attic and down an existing attic to basement opening in to the storage room where my router lives. I meant to ask him to pull an extra lead down so that I could re-use the same drop some day, but I had to do something new-homeowner-ish while he was installing it, and I forgot.

We also put a desk in that little living room nook. It's my wife's primary work space; the household iMac and our home phone share it. Our iMac has been chugging along on our 802.11g network, but that has several throughput-releated downsides since all of our media data (music, tv, movies, etc.) live on a network share. My two other machines, both in the basement, were far easier to patch (drop ceilings, easy access to both rooms, etc.)

This week I have an abnormal amount of personal project time, so I thought one of my first tasks should be to see if I could somehow get this ethernet drop added to our wired network. Figuring I could somehow use the same route our FIOS tech used, I came up with three :

Sarcasm aside, I really like option 3. It gives me an excuse to create wiring capacity in my wall for later running about a half-dozen sets of 2xcat6/1xcoax, which has been the eventual plan. From my attic, though, it's really hard to tell what's a couple of inches to each side of the existing hole through several layers of ceiling/floor boards. The conduit is 2 inches in diameter, and the hole is about 2.5 inches wide. With the existing coax in there already, I couldn't shine any discernible light source either upwards or downwards in a way which gave me a clear view of the interior of the run. It's too bad, too, because it sure would be easier long-term to snake some 2 inch flex conduit up through a new set of holes and be done with it.

Option 2, then, seemed like the interim winner. I crawled over to the conduit run the other day and saw that I could see about 1/4 of an inch of light at the bottom of the run in the basement, if I stared hard enough. That was enough to motivate me to take a shot at it, so I set out to tackle the next problem, how to guide the wire down without it curling, wire fish being out of the question from a power-conduit-integrity perspective. 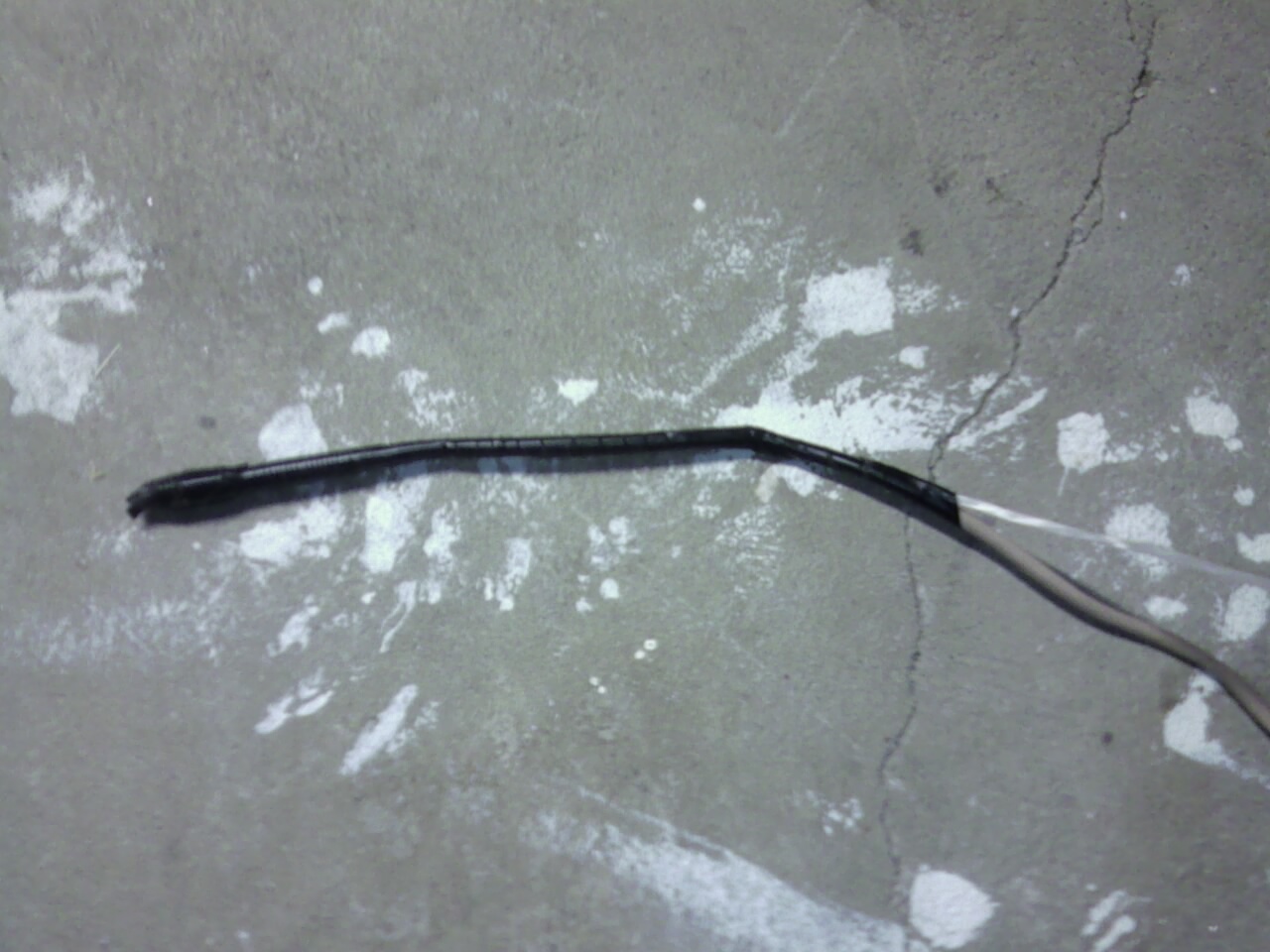 I MacGuyver'd myself a lead:

I ran the cable down and when I felt it stop pulling1 I guessed that I had hit the end of the run. The resulting view from the basement was promising: I could see the end of my lead and pulled it through the rest of the way using a very long pair of needlenose pliers. 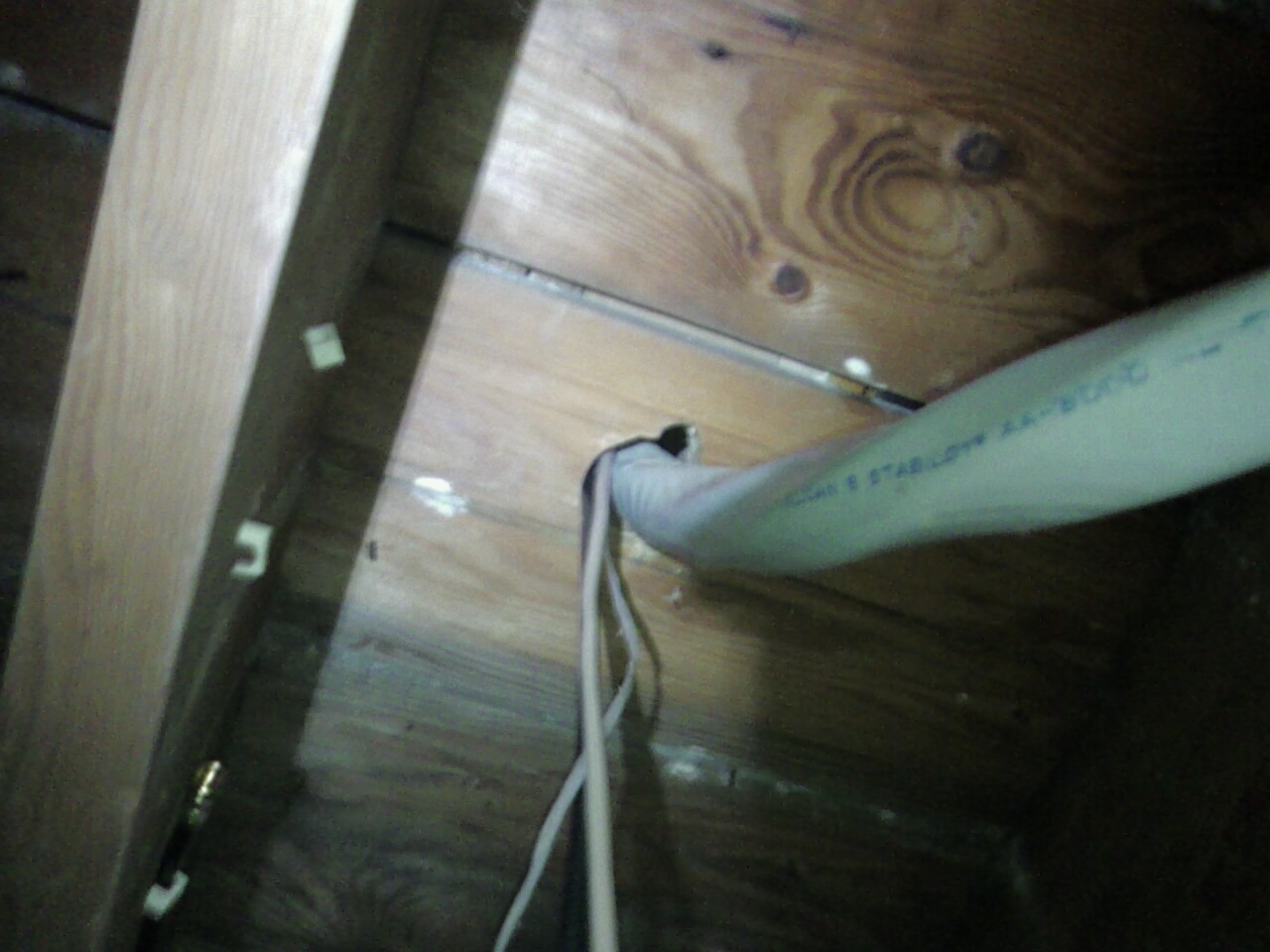 Cable terminated, I drafted this post on my wired mac, enjoying media throughput at about 4-6x stronger than it was on the WLAN2. I'll have to revisit my ideas for cabling the entire house. For now I'm considering using what I have right now as-is, and putting a punchdown block with a cable split, phone breakout and a gigabit switch up in the attic so that I can minimize the work required to traverse the floors. It means I'm splitting cable twice rather than once, which breaks a geek rule or two, but I'll have to move on.

After this experience went so well, and I couldn't see the shadow of the drop swaying much from the basement light source, I think the run's location itself is pure luck - it's probably a 3-4 inch-wide space in an interor wall between studs either near a wall's end or a corner. I don't think option #3 up there is even feasible in the same spot. There are probably other spots I could do this, but to make myself confident that it's possible, I'd really need to tear out pieces of one of the first floor walls to see what I was working with, (which may have been how they did the existing run in the first place).

And that, as anyone would imagine, has incredibly low WAF.