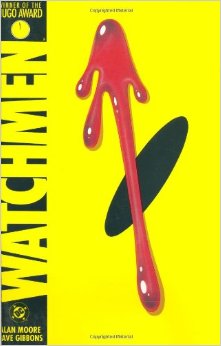 I knew I was going to see The Watchmen this weekend, so since I somehow missed the boat on the entire Graphic Novel genre when I was growing up, I borrowed the original from a friend at work and read it before going to see the movie.

This post is not going to be one of those reviews that lists the things I liked vs. the ones I didn't. It won't be a post about what was missing from the movie. Suffice it to say that I liked the movie, but I loved the book. The story was far easier to follow in print, even with all of the pirate comics mixed in. I thought Malin Akerman was mis-cast as Laurie Jupiter, but the rest of the ensemble worked really, really well.

It's been interesting walking around the office and discussing the move with other folks who saw it this weekend. Some liked it, some wanted their 3 hours back. So far, though, no one outright loved it. It was a successful adaptation, but to most, they were looking for a semi-faithful interpretation. I know why it wasn't, and I know about the ridiculous drama that has surrounded the decade-plus delay in getting this film to the screen. The film's ability to be "awesome" viewers who haven't read the book was far diminished, however. And, since it wasn't 100% faithful near the end, those who loved the book left wondering why the changes were made. I actually found the differences confusing, having read the last two chapters only five hours before seeing them on screen, but some thought that the modified ending was easier to understand on a wider level.

To each, their own, of course. I hear there's even more in the director's cut, so I'll have to acquire the DVD when it's released.