I've been thinking about blogging for a while now, but it's been busy these days. During these busy days, however, I stumbled upon the blog being run by the Transportation Security Administration (TSA). My wife tells me that it's been commonly known of for a while now, but digg.com seems to drive most of what news I read, so somehow I missed this one.

Nevertheless, I've been finding it very interesting. Two recent posts about the troubles that passengers have recently had with the new MacBook Air was very enlightening. It was also the perfectly appropriate response to the complaint. The average MacBook Air user is probably the same demographic as the average reader of blogs, so it stands to reason that the most appropriate marketing channel is the TSA Blog. Kudos to that. I'm also curious to see how/if they'll post about the article which hit the wires today about a Texas woman being forced to remove a body piercing with a pair of pliers to be able to board a flight. The article was somewhat sensationalist, but that's the mainstream media for you.

I leave you with italic kittens, which is both entirely irrelevant to this post, and quite geeky at the same time: 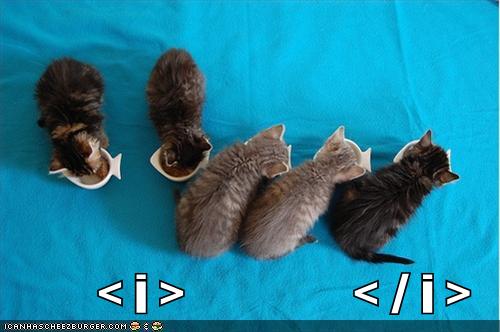